Yesterday I became a cheese maker!

The FSC Book Club is off and running! I have to admit, ever since I cracked the spine on Alana Chernila’s The Homemade Pantry, I’ve been a tad obsessed. I carry it around in my bag for some light reading. I read it on the train in the hopes of my train neighbor inquiring about it. I read it aloud to Heather, whether she likes it or not. Needless to say, I was a bit eager to get started. So, despite the fact that we were having our friend Carrie over for dinner and that I had already committed to making homemade samosas with a lentil side dish (recipes coming soon), I went for it!

Ricotta was the first cheese that Alana made at home and it is the first recipe in her book. I was drawn to its simplicity of ingredients (no rennet or cultures required) and process. Plus, who doesn’t love some fresh ricotta cheese?! I figured that if it went well, we could serve it to Carrie for dessert with some berries and honey. So, despite the otherwise kitchen-heavy day, I carved out some ricotta time. Here’s how it went.

First things first, Alana offers a trick via “The Cheese Queen” (Ricki Carrol) to prevent scorching your pot. Simply place an ice cube in the bottom of your room temperature pot until it melts completely. Leave the water in the bottom of the pot when you add your ingredients and be sure to stir without touching the bottom. That keeps the bottom of your pot protected as your milk magically turns into cheese. 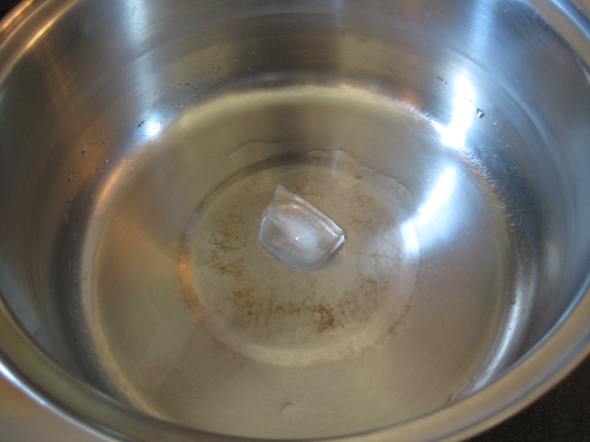 While your ice is melting, squeeze some fresh lemon. You need 1/3 of a cup of lemon juice, which should be about 1 1/2 – 2 lemons. I apparently had some less juicy ones, since it took me three. Perhaps a juicer would been helpful here, but instead I had lovely lemon-scented hands for the rest of the day. 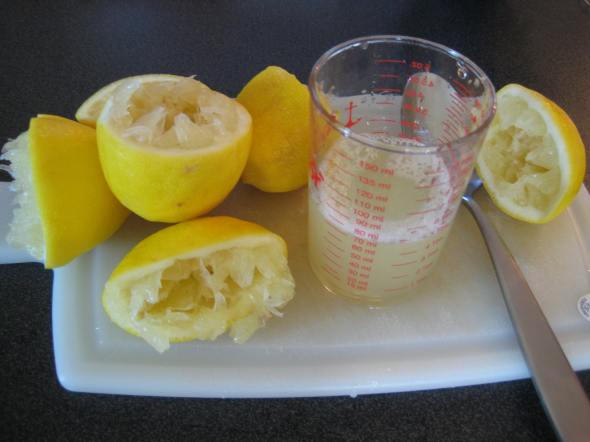 Get out the rest of your ingredients and gadgets. This includes a half gallon of milk, cheesecloth, a fine sieve, a thermometer, and some salt (optional). I chose not to include the optional 1/2 cup of heavy cream. 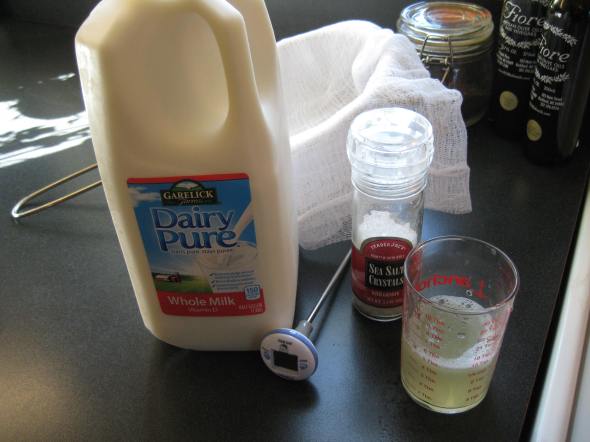 Add your milk and lemon juice to your iced pot and stir for 5 seconds without touching the bottom. Place the pot over low heat and attach the thermometer. Heat the milk to 175 degrees, which should take 40-50 minutes. 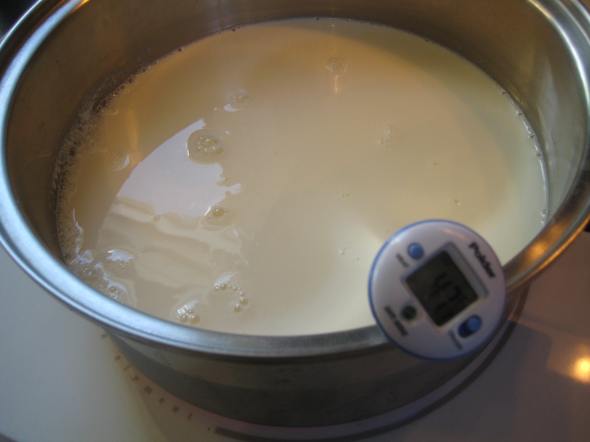 Beware: every stovetop is different. I’m working with an electric stove, which I believe gets much hotter much quicker than gas. I hate it, but we’re renters, so c’est la vie. About twenty minutes in, I started to feel like the temperature was getting too high too quickly, so I turned down the stove to the lowest heat possible and that seemed to do the trick. But then the temperature started dropping instead of rising, so I put it up just slightly. This seemed to work. I also stirred the pot (careful to avoid touching the bottom) once or twice during this time. 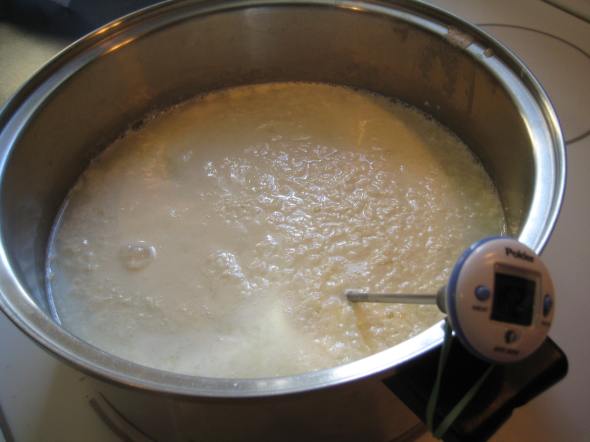 All was going well when one LARGE scare-the-living-daylights-out-of-you bubble crept to the surface and exploded. With my heart racing and mind my panicking, I turned the heat off for a second and then back on. Hey, I never claimed to have grace under pressure! Anyway, I returned the heat to its very lowest setting and it slowly crept up to 175 degrees with a few more bubbles, but nothing too catastrophic. Even with all my temperature fluctuation, it actually did take about 43 minutes.

At this point, Alana instructs you to adjust the temperature to medium-high heat until the thermometer reads 205 degrees, which should take 3-5 minutes. Well, I was NOT jacking up the heat that high on my sensitive electric stove. I barely nudged the temp and crossed my fingers and hoped for the best. I did have a few more big bubbles and felt like I was holding my breath for the next 7 minutes, but it did quickly reach 205 degrees and then I promptly took it off the heat. 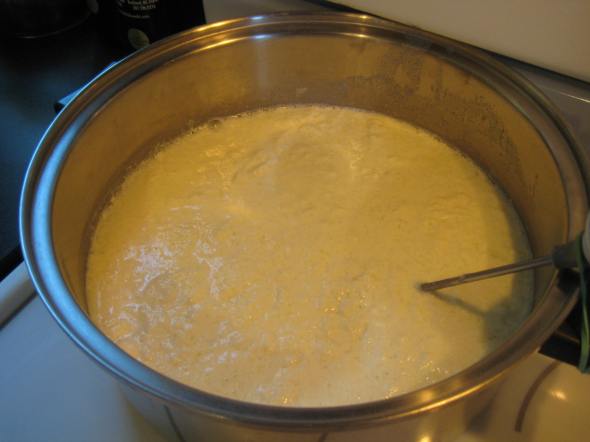 I let the pot sit for about 10 minutes and then lined my sieve with two pieces of damp cheesecloth and started straining. Unfortunately, we have misplaced our slotted spoon (Heather insists that the movers stole it…?), which would have made this process infinitely easier. Once you’ve finished straining, you can salt it, should you choose. 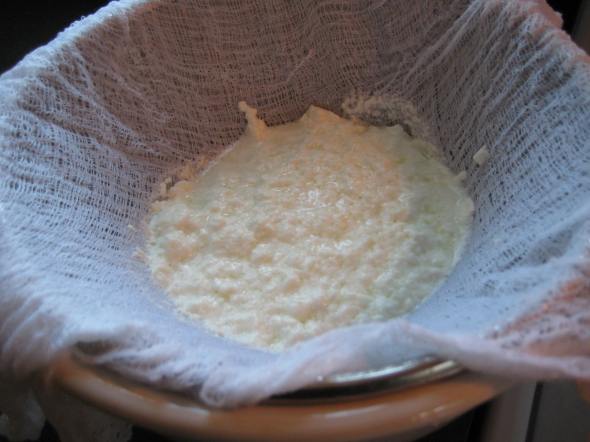 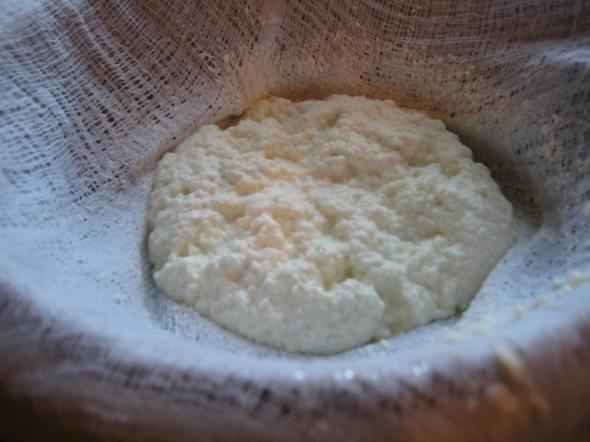 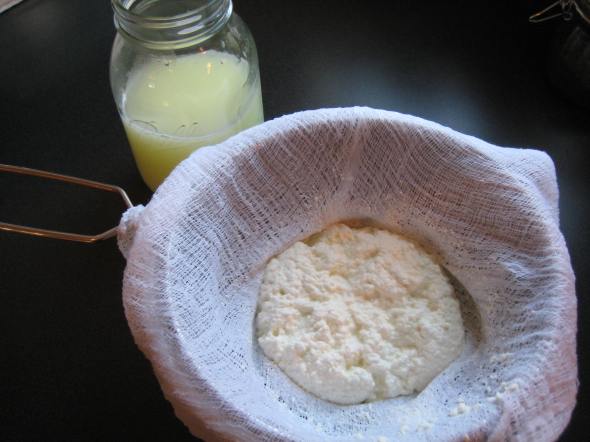 I am a cheese maker!

Alana encourages you to save the whey. It stays good in the fridge for up to 2 weeks, the freezer for 6 months, and is packed with nutrition, protein, and flavor. She recommends using it instead of milk or water in your homemade breads, in place of stock in your soups, or even in your smoothies instead of juice or milk. But be careful – it looks a bit like lemonade. ; ) 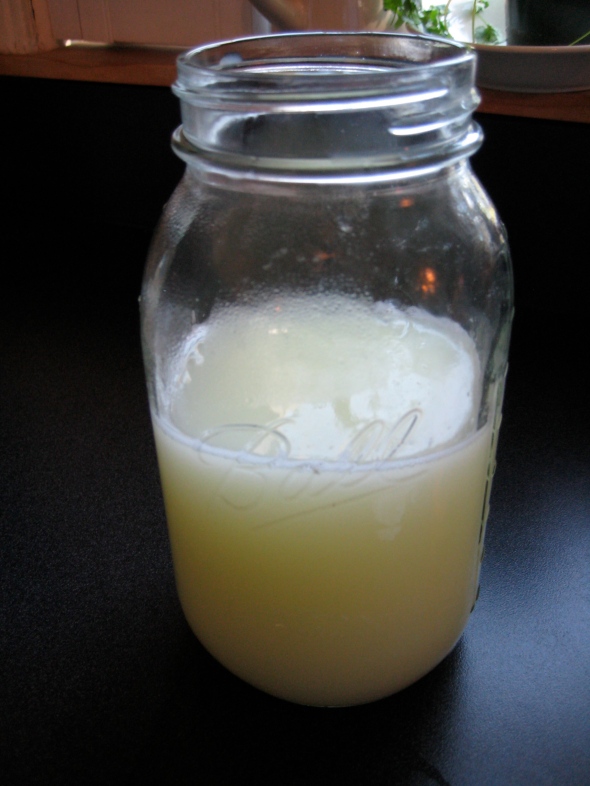 After some sampling, I declared this ricotta DELICIOUS! It has a really nice flavor that is somehow also very subtle. The texture perked right up after a few hours in the fridge. We served it topped with blueberries, some local honey, and a touch of cinnamon. Did I mention it was delicious? 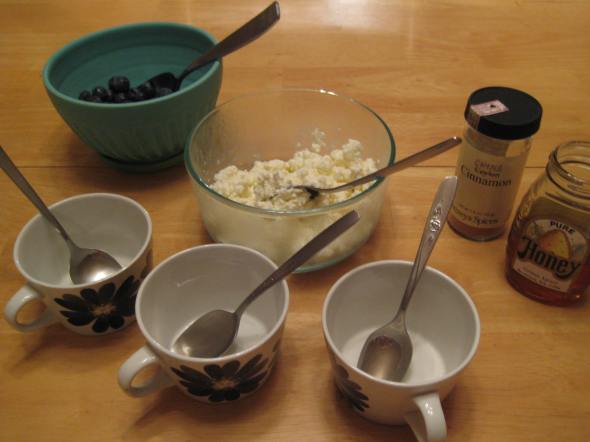 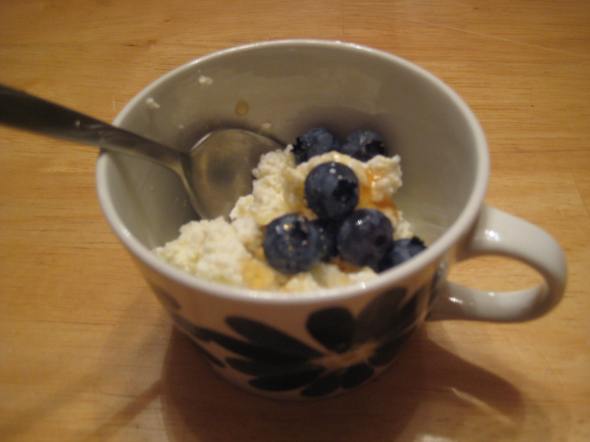 So… Was it worth it?

Definitely. Especially on a day that I’m not also making a full from scratch dinner. To be honest, though, I’m not sure it would be worth it to make it just to put it in something else, like lasagne. It’s just so good by itself and by the time I was done making it I just wanted to eat it with a spoon. I think that this might become a special, healthy dessert-treat.

It was also totally worth it just to be able to call myself a cheese maker!

Ricotta will keep for 3 – 5 days in the fridge, tightly covered. Good to know, but I’m pretty sure it will be gone by the end of the day.