Oddly, Brussels sprouts have been a topic of several conversations this week. For some reason, it seems that many folks are curious, but still uncertain about them these days. I think this might be rooted in the fact that, for many of us, Brussels sprouts made a poor first impression. You remember – they were the stinky, mushy, and altogether unpleasant kid at the dinner table. But let me tell you, Brussels sprouts have come a long way since then and this risotto is a great way to give them a go, particularly if you’re feeling a bit skeptical.

Speaking of bad first impressions, risotto’s got quite the reputation. In the words of the inimitable Isa Chandra Moskowitz,

After one episode of Hell’s Kitchen you’ll be pretty convinced that risotto is the biggest, most backstabbingest heartbreaker there is. It will stop at nothing to betray you. Risotto makes Gordon Ramsey kick the trash can on the regular. It breaks. It burns. It refuses to cook. It jumps out of the pot and shivs you if it given half the chance. Sleep with one eye open.

But as Isa continues, and as I can attest, it really doesn’t have to be so darn difficult. Just be patient, be prepared, and stir. 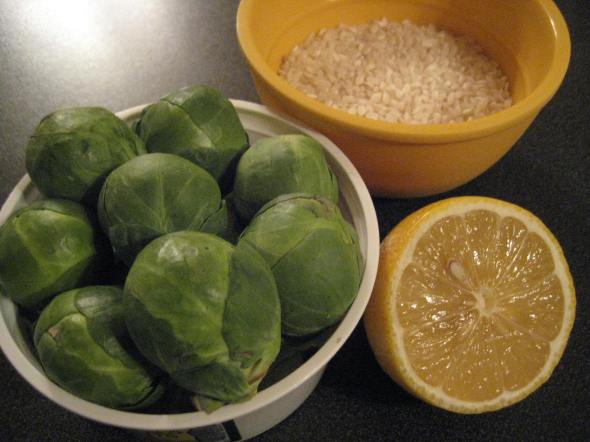 1. First, blanch the sprouts: Bring a large pot of water to a boil. Fill a bowl with ice water. When the water comes to the boil, salt generously and add the Brussels sprouts. Boil two minutes, then transfer to the ice water. Drain, dry on paper towels and cut in quarters.

2. Put your stock or broth into a saucepan, and bring it to a simmer over low heat, with a ladle nearby or in the pot. Make sure that it is well seasoned.

3. Heat 1 tablespoon of the olive oil over medium-high heat in a wide, heavy nonstick skillet. Sear the Brussels sprouts just until beginning to brown, about three minutes, stirring and shaking the pan. Remove from the heat, and transfer to a plate or bowl. Season to taste with salt and pepper.

4. Heat the remaining olive oil over medium heat in the same skillet, or in a large, wide saucepan. Add the onion and a pinch of salt, and cook gently until it is just tender, about three minutes. Do not brown.

5. Add the rice and the garlic, and stir until the grains separate and begin to crackle.

6. Add the wine, and stir until it has been absorbed.

7. Begin adding the simmering stock, a couple of ladlefuls (about 1/2 cup) at a time. The stock should just cover the rice and should be bubbling, not too slowly but not too quickly. Cook, stirring often, until it is just about absorbed.

8. Add another ladleful or two of the stock, and continue to cook in this fashion, stirring in more stock when the rice is almost dry. You do not have to stir constantly, but stir often.

9. After 10 minutes, stir in the Brussels sprouts. Continue adding stock and stirring. When the rice is tender all the way through but still chewy, in about 25 minutes, it is done.

10. Taste now and adjust seasoning, adding salt and pepper to taste. Add another ladleful of stock to the rice. Stir in the lemon zest, lemon juice, and Parmesan and remove from the heat. The mixture should be creamy (add more stock if it isn’t). Serve right away in wide soup bowls or on plates, spreading the risotto in a thin layer rather than a mound. 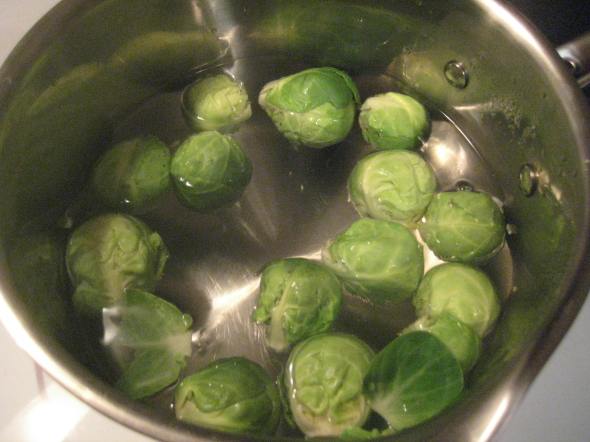 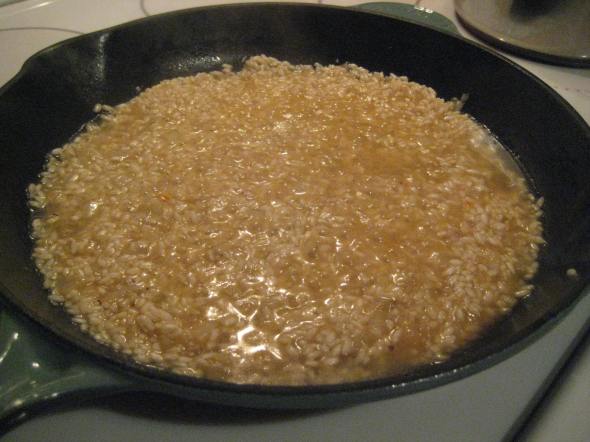 So, this was definitely my most successful batch of risotto and I’m pretty confident it is because I used my cast iron skillet. Cast iron is a terrific conductor of heat, so I actually cooked my risotto on a very low heat. My skillet is also very wide (almost wider than my electric stove’s burner circle), so that allowed the rice to be in a single layer, allowing for more even cooking. 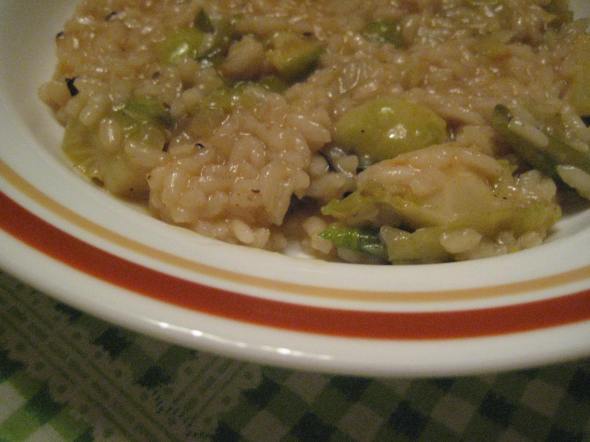 The one thing I regret is that it seemed slightly too salty, perhaps because my veggie stock, unbeknownst to me at the time, included a lot of salt. So, be sure to take that into consideration as you’re cooking.