Cake fit for a King (or Queen)

I confess, before I moved to New Orleans, I assumed I would hate Mardi Gras. As a non-drinker who is more comfortable on her couch than on a parade route, I figured I’d just skip the holiday (and holiday it is – schools are cancelled and many businesses close). But I soon learned that Mardi Gras is and isn’t what you think.

It’s a season that both lives up to its worst image (boobie-flashing, cat-calling, drunk and disorderly conduct) and shatters it. I was shocked to see that, on the parade routes outside of the Quarter, children are in abundance! They are often seated in homemade, somewhat precarious ladder/booster seats, so they can see better and catch “throws,” which include beads, stuffed animals, glittery shoes, coconuts, and doubloons, depending on which parade you’re at.

Perfect strangers become friends while standing next to each other waiting for the parade to “roll.” I once bumped into a classmate of mine from Holy Cross on a street corner. We were mere acquaintances in college, but here we were on the same corner three years after graduation. He told me that he had grown up in Louisiana and his family had been standing on that particular street corner for decades. In New Orleans, Mardi Gras is just another family tradition.

If there is any one thing that helped me to enjoy Mardi Gras, it’s King Cake: a cinnamon roll-type sweet bread that is eaten during the season. Its name is connected to the feast of the Epiphany (when the three kings are said to have visited Jesus), which kicks off the season of Mardi Gras. There is typically a small plastic baby hidden inside, meant to represent the baby Jesus. Whoever receives the piece of cake with the baby inside earns themselves certain obligations and/or privileges, depending on who you’re asking. Usually, it means that you have to provide the next king cake or host the next Mardi Gras party.

I’ve never attempted to make King Cake before, but since Worcester was expecting 28 inches of snow this weekend, I figured it was appropriate timing to get baking.

View from my kitchen window.

This recipe requires two rises, so make sure you plan ahead. Here’s my version of Emeril’s recipe.

Combine the warm water, yeast and 2 teaspoons sugar in a small bowl. Mix well and set aside in a warm place for about 10 minutes.

Turn dough out on a lightly floured surface. Knead in enough remaining flour until the dough is no longer sticky. Continue kneading until the dough is smooth and elastic (about 10 minutes). Place the dough in a well-greased bowl. Turn once so greased surface is on top.
Cover the dough and let rise in a warm place until doubled in bulk (about 1 1/2 hours). 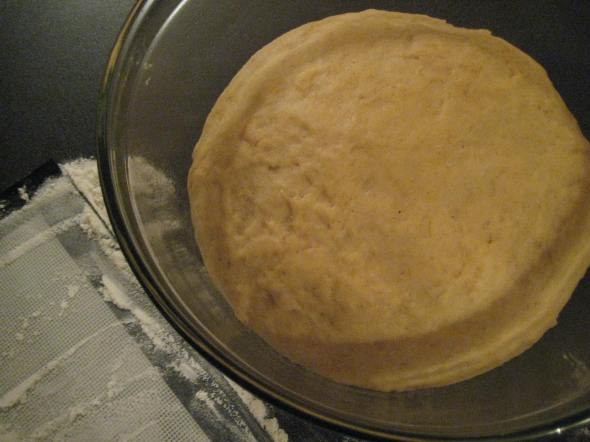 Meanwhile, take cream cheese out of the fridge to temper. About 15 minutes before rising is finished, combine the filling ingredients in a standing mixer until whipped and light.

Punch the dough down and place on a lightly floured surface. Roll the dough into a rectangle-ish shape, about 30 inches long and 10 inches wide. Spread the filling in the center of the rectangle, leaving about an inch on each side. Starting at the long side, roll the dough into a log. Place on a buttered baking sheet and shape into a ring, pinching ends together to seal.

Press the dried bean into the ring from the bottom so that it is completely hidden by the dough. Cover the ring with a towel, and let rise in a warm place until doubled in bulk, about 45 minutes.

Bake for 30 minutes, or until golden brown. After only 25 minutes in my oven it was quite golden, so keep an eye on it.

Whisk together glaze ingredients until smooth. To assemble, drizzle cake with the glaze and sprinkle with sugar crystals, alternating colors. Serve at room temperature and beware of choking hazard! 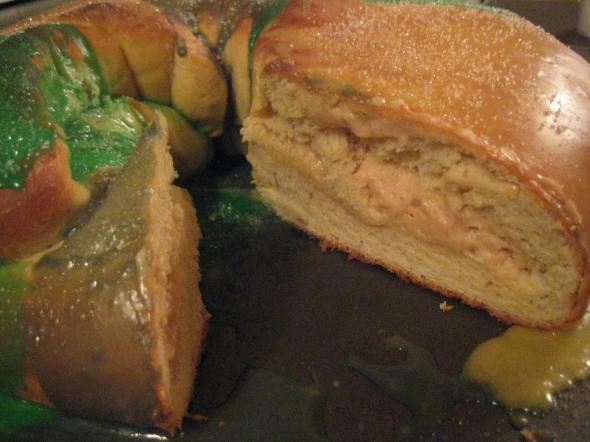 Examples of “throws” in the background: beads and a sparkly shoe from the 2007 Muses parade.