For many years when Heather and I lived in Providence, we hosted a series of Friday night community meals during the season of Lent. It started because we love to host, we’re vegetarians, and we know a lot of folks who abstain from meat on Fridays during Lent. It grew into an excuse to gather together regularly during the winter and early spring. After all, nothing makes us happier than having a house full of people and cooking a big ol’ pot of soup!

This past Friday was our inaugural Simple Supper here in Worcester and it was a small, but successful start. The beauty of Simple Supper is that it often brings together a completely random group of people, many of whom don’t know one another. This is why we started hosting supper clubs a few years ago – we love creating a space where acquaintances can become friends and where conversations are meaningful and include healthy doses of laughter. This week, we were joined by three friends – two of whom I’d never met. (Good thing none of us are serial killers…)

Friday’s menu included a carrot, apple, pear, and sweet potato soup, topped with cilantro oil. We served it with a fresh green salad and some crusty bread. Here goes!

Orange Soup with Cilantro Oil (Can I call it that? ‘Cause, I just did.) – based on this recipe from Edible Biology

Setting the table is probably my favorite part of preparing for guests. A set table creates an intentional, thoughtful space that (I hope) indicates to our guests that they are part of a warm and welcoming community. Plus, it’s an excuse to actually use your table linens and pull out your pretty serving ware. 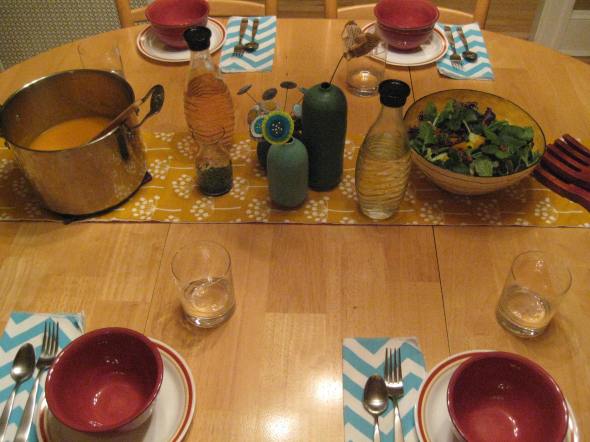 I think this soup was a hit! If you’re slightly scared of adding fruit to your soup, don’t be. The apple and pear offer a subtle sweetness, with just a hint of appley pear-ness. I liked the addition of the cilantro oil, but I served it on the side, as not everyone shares my enthusiasm for the herb. It was a simple meal, but it was also delicious and warm and wintery. And it was made all the better by the awesome company.

Stay tuned for another Simple Supper recipe next week! Enjoy!