These adorable little muffins came into my life just in the nick of time! Saturday morning I found myself awake at 6:00am, unable to fall back to sleep. I rolled over grumpily and grabbed my phone to do my usual morning social media check-ins. After perusing my Facebook, Pinterest, and WordPress feeds for almost an hour, I finally gave up and got out of bed. If I’m going to be awake, I might as well do something productive!

Flipping through the many breakfast recipes in Liana Krissoff’s Whole Grains for a New Generation, I stumbled upon these yummy-sounding apple oat muffins. It just happens to be oats week over at the FSC Book Club, so it seemed like the perfect match! I tiptoed around the kitchen (and by tiptoed I mean, I tried really, really hard not to bang into or drop anything) and got to work.

After these finished baking, I lovingly renamed them ragamuffins. Their batter is super thick and stiff, so they came out of the oven pretty much exactly as they looked when they went in – raggedy and rough.

Fear not! They are dense and sweet and reminded me of coffee cake. (But perhaps that’s because I couldn’t resist adding some brown sugar to the top before sliding them into the oven.) Here goes!

I made several changes to Liana’s original recipe, including using whole wheat flour instead of white whole wheat, almond milk instead of cow’s milk, raw sugar instead of white, and sour cream instead of plain Greek yogurt. Almost all of those substitutions were made simply because it was 7am and I sure as heck wasn’t heading to the store. These changes may have contributed to the raggedy texture, but I can’t be sure. 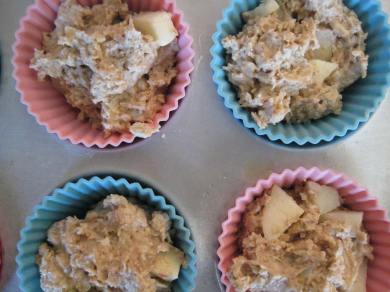 Only 15 minutes after these came out of the oven, we lost power. Talk about timing! They were the perfect treat to savor, along with the coffee I had just finished making (thanks be to God!), as we planned a day trip to Providence – the land of electricity, good friends, and about 19 fewer inches of snow!

One thought on “Apple Oat Muffins”