On this day, 29 years ago, my favorite curly red head came into this world! 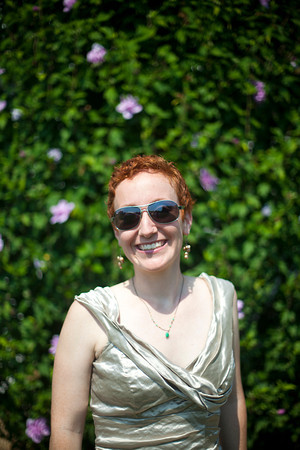 For birthdays, holidays, and other such celebrations, we’re not big on giving each other presents. We usually do something small and thoughtful and make sure that we spend some quality time with the people we love.

So for Heather’s birthday, we decided to head to Providence this past weekend to have a small dessert celebration. (We are a match made in sugar heaven.) I’ve been cultivating the art of sugar cookie decorating and I have a looong way to go. But Heather’s birthday was the perfect opportunity to practice another round.

While I do make *award winning* banana bread (warning: future blog post), my baking repertoire is limited. I’m much more of a cook than a baker, because I like the improvisation that can happen when you’re standing over a skillet. Anywho, I decided to give this a go while I have the time.

I started by doing a lot of internet research. Well, maybe a little internet research is more accurate. When I stumbled upon The Sweet Adventures of Sugarbelle I sort of stopped looking. Callye is really tremendous at this whole cookie thing and she posts all kinds of tutorials, videos, and photos to help the novice or advanced cookie artist. I highly recommend her basic sugar cookie recipe (which she also talks about in more detail here). They are light, sort of cake-y, softer cookies that are great for decorating.

For Heather’s birthday, I decided to make stars and cupcakes. Nothing says birthday like cupcakes, right? The cupcake cookie cutters came from Crate and Barrel (say that three times fast!). I had a random gift card with about $5.00 on it, which was perfect for these guys and the jumbo nonpareils that I used on top of them.

Rather than take you through the step-by-step, I’ll just let you ogle over the photos… 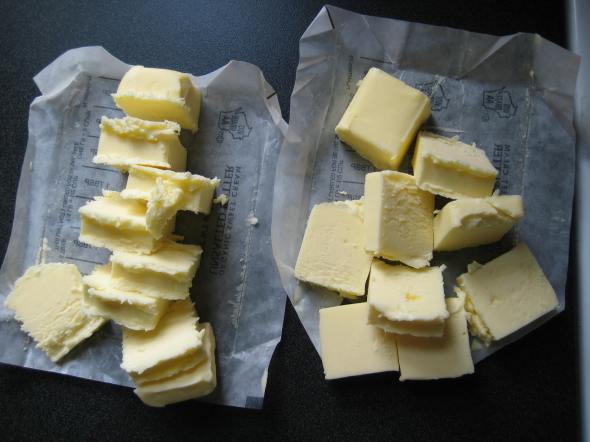 If you forget to take the butter out of the fridge early enough, just cut it into small pieces to help it come to room temp more quickly. 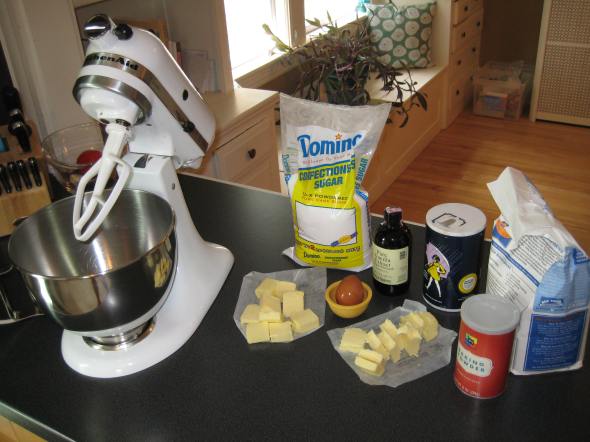 I like to get everything out and ready ahead of time. (Not just because it makes a nice photo.) 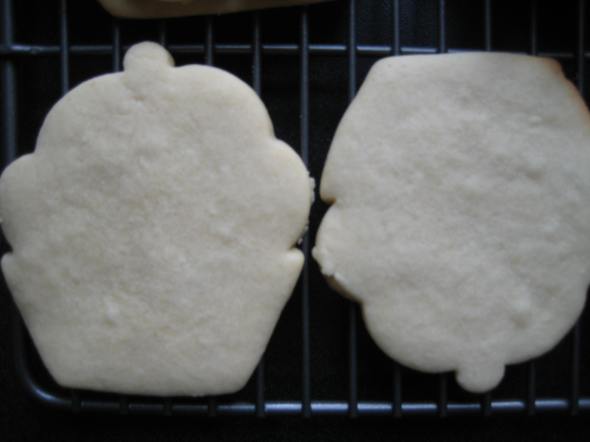 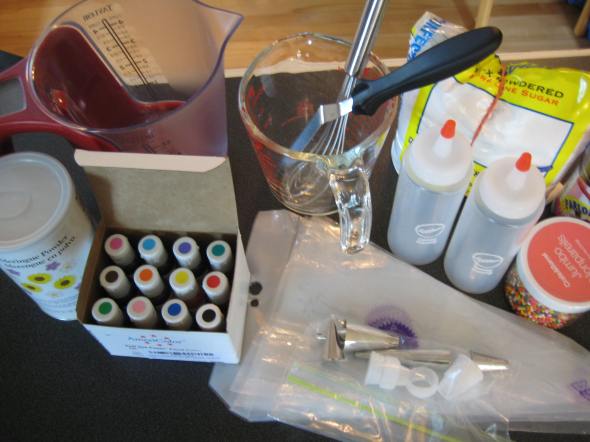 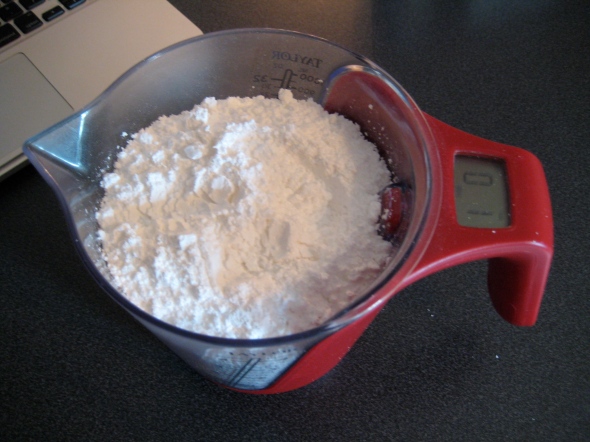 Accurate measuring is key! I used this handy scale and measuring cup combo.

It’s hard to resist this icing… 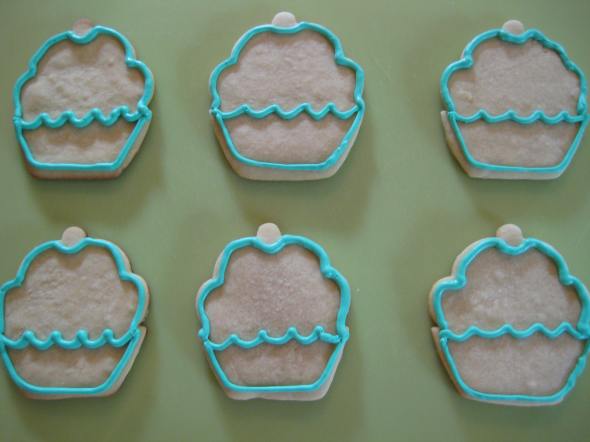 Piping icing consistency is used to outline the cupcakes first. 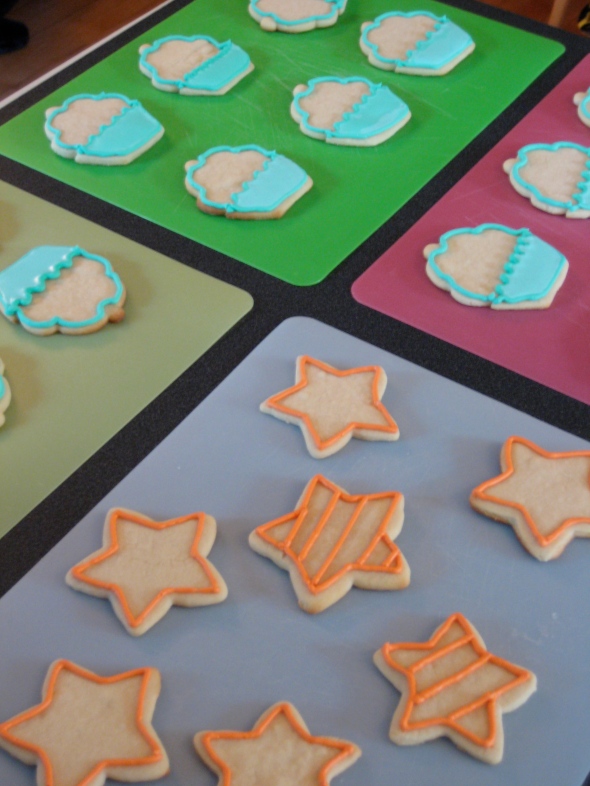 Next you flood the cookies with a looser consistency of icing. 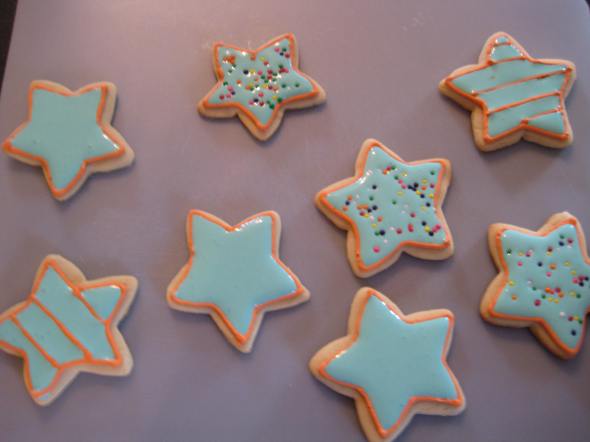 Add some nonpareils or sprinkles for an extra boost of fun! 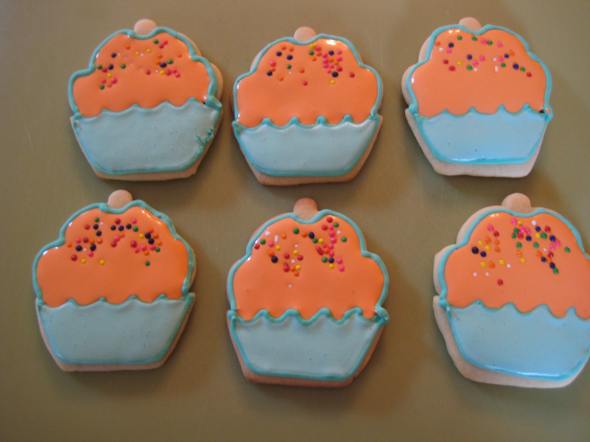 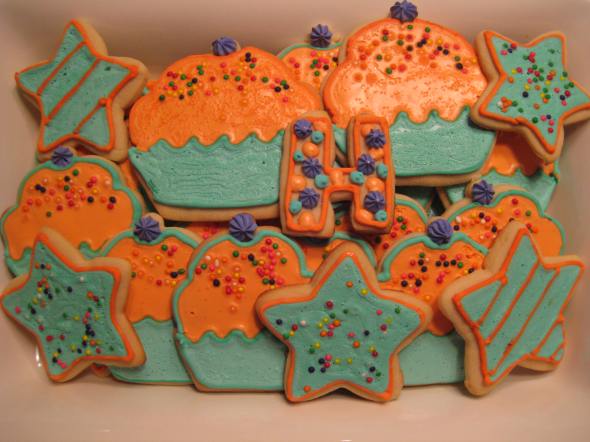 Ta-da! A platter of cookies fit for a Birthday Queen!

So, a few things went well and a few not-so-much. Here’s my re-cap:

-The cookies were delicious! Consistency was good. I only burned two of them (beware of rolling your dough too thinly).

-They were adorable. Fact.

-I had a blast mixing up colors. (With the help of Sweet Sugarbelle’s color chart.)

-The squeeze bottle technique for the flood icing made it much easier than my make-shift spoon technique that I had previously tried.

-I had some MAJOR air bubble problems. (See last photo.) Perhaps the problem was that I sort of followed two recipes at the same time, both Sweet Sugarbelle’s and one from Martha. I followed Callye’s recipe for the ingredients, but her batches are so huge I was afraid to cut it in half, not knowing if the ratios would be the same. So I looked for another recipe that made a smaller batch just for the ratios (Martha’s) and then added some flavoring. I was also not as precise as I could have been in terms of icing consistency, nor was I careful about the amount of mixing I did. I guess I’ll just have to try again real soon!

Anyway – not the most perfect of beautiful cookies, but certainly tasty! They were a big hit with the birthday girl – and that’s really all that matters! 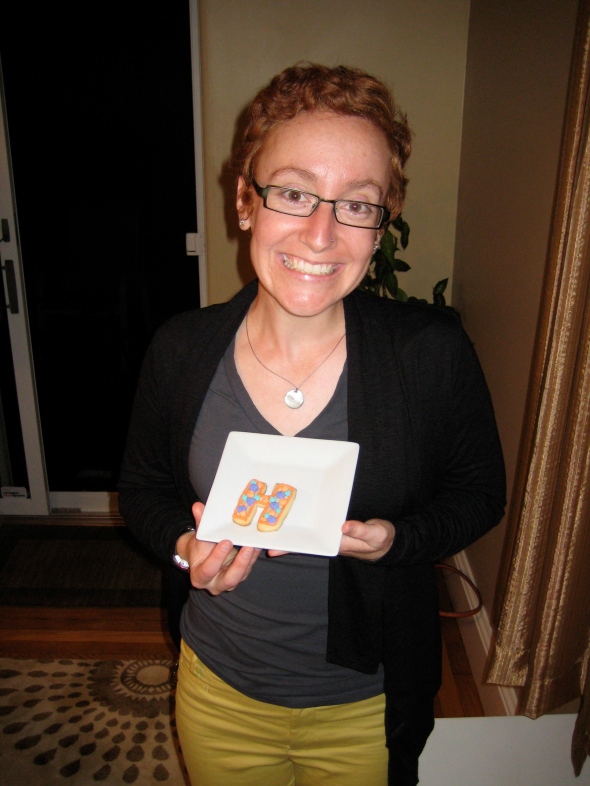