When I cook, I have to listen to music. Most of the time, I rock out to one of my well-loved Pandora stations – Beyonce for some classic R&B; Taio Cruz for a hip hop dance party; Ray LaMontagne for some singer-songerwriter ballads; or The Paper Raincoat for a folk-pop combo.  But sometimes a song comes along that I just have to listen to over and over again. Yesterday, I listened to this Fun. little gem (pun intended) all darn day.

(Thanks to my twin bro who gave me the CD. *Warning – there is an F bomb in there. Also, I may or may not be listening to this right now. Too much? No? Okay good.)

Anyway, with my soundtrack on repeat, I got to work on my very first frittata. See, I got a cast iron skillet for Christmas last year, but I just hadn’t gotten around to reading the instructions until about a week ago. (Really. That’s my excuse.) Turns out, it’s not rocket science. So glad I’ve been sitting on this gorgeous pan for almost a year.

I opted for a zucchini, potato, and feta frittata. I found these darling red potatoes at the farmer’s market, along with the onion. Unfortunately, zucchini was nowhere to be found this week, so it came from the store, along with the feta. 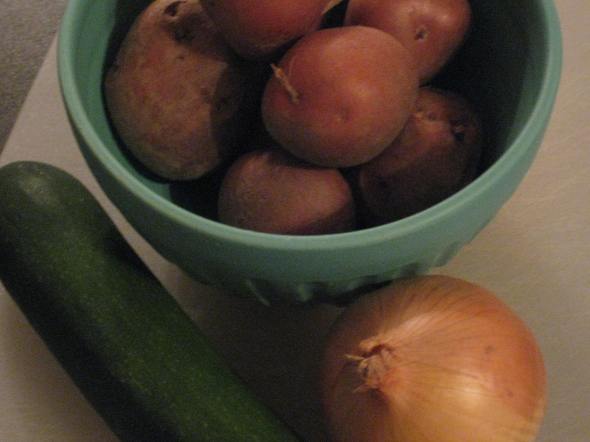 Turns out, making a frittata is also not rocket science. I basically made it up as I went along. Here goes:

First up – wash your produce! Those potatoes needed a good scrub, but since they came from an organic farmer, there’s no fear of pesticides. Yay!

Next – slice your zucchini and sprinkle with a bit of salt.

Let it “sweat” in a colander for about 20 minutes. (This suggestion came from somewhere on the internets. I’m not sure of the purpose. I know that often people salt eggplant to remove the bitterness, but zucchini isn’t particularly bitter. You could probably skip this step, but if so, you may want to salt the dish somewhere else in the recipe.)

Thinly slice your potatoes and cut a medium onion. Put them in an oven-safe skillet over medium-low heat with a few tablespoons of oil. I seasoned them with some freshly ground pepper and some Penzeys Mural of Flavor, but use whatever you like. Cook for about 20-30 minutes, until tender. To add some crispy crunch, turn the heat up for the last 5-10 minutes. 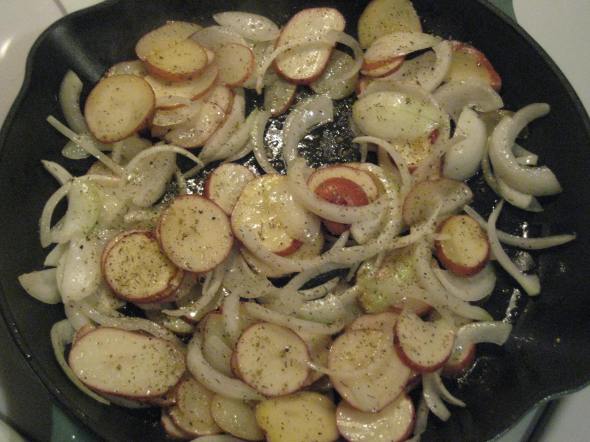 Isn’t that pan a beaut?

Meanwhile, you can cook up your favorite breakfast protein. I opted for fake bacon.

Preheat the oven to 350 degrees.

At this point, I encountered what Alana Chernilla euphemistically calls a “tense moment.” My potatoes kept sticking to the bottom of my skillet, despite the generous amount of oil in the pan and the medium heat. I know that cast iron is a great conductor of heat and does not require high heats, so I lowered the heat from medium to low. This helped, but not much. The lovely thing about frittatas is that everything is partially cooked on the stovetop and then the whole thing is put in the oven – in the same pan. I was worried that if the potatoes continued to get stuck, the frittata would emerge from the oven with a completely burnt crust. Alas, I continued on, scraping with my wooden spoon as I went, hoping for the best.

When the potatoes are almost done, remove the zucchini from the colander and pat dry on a clean kitchen towel.

Remove the potatoes and swap in the zucchini, cooking on medium heat for about 5 minutes.

Whisk 6 eggs in a large bowl. 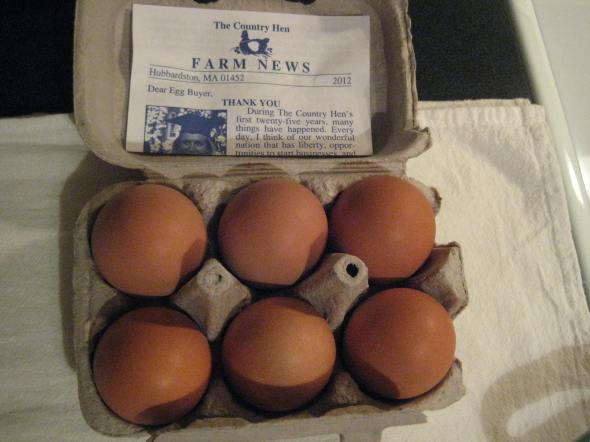 Add the potatoes and onions, zucchini, bacon, and about a cup of cheese (I went with feta) to the egg mixture.

Pour the frittata mixture back into your (still hot) skillet and cook on medium heat, without stirring, until the bottom sets. This took about 8-10 minutes.

Carefully transfer the skillet into the oven and cook for another 10 minutes or so, checking every so often. Insert a toothpick to be sure that the egg has completely set. 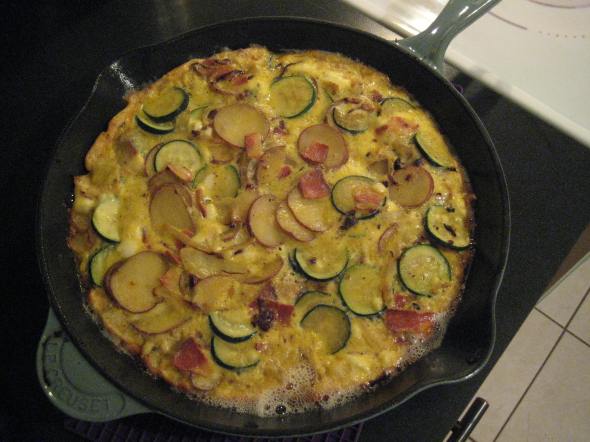 Magically, the bottom did not burn, despite my “tense moment” with the potatoes. 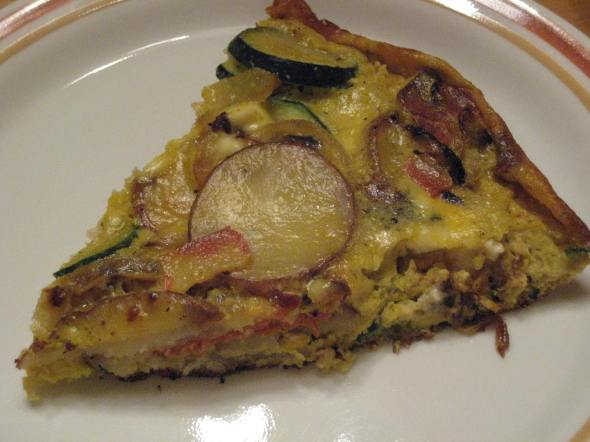 Clearly, we hated it.

2 thoughts on “Fun. and Frittatas”