Quick breads are pretty much my baking go-to. They usually involve things that are already in your fridge and pantry, they often utilize the “dump and stir” method, they are equally delicious for breakfast or dessert, and they act as the perfect host gift.

So, when we were invited to a friend’s home for dinner and were informed that all we could bring were some origami paper cranes (a suggestion made in jest), I figured I would whip up a quick bread for the hosts. Naturally, we also brought some origami cranes.

This coffee cake recipe exhibits a serious love for crumbly streusel. Not having read the directions completely (a recurring problem of mine), I missed the part where you layer the batter, then streusel, then batter, then streusel. Instead, I wound up with a HUGE amount of streusel on top and then used a fork to swirl it around. It worked, but I recommend trying it the proper way first. For the record, the original recipe is not called a “layered” coffee cake, but I thought I’d include that for those of us who might need a reminder… Here goes!

For the coffee cake:

Lots of streusel should have tipped me off! 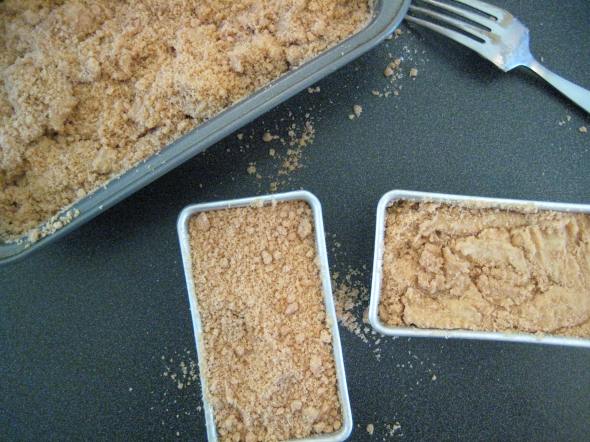 I made a few significant changes to the original recipe. As usual, I replaced half of the all-purpose flour with whole wheat flour. I also used sugar in the raw in place of white sugar. You can always do a one-to-one replacement of raw for white and there isn’t usually much of a difference in taste or texture. Sugar in the raw has a slight molasses flavor, so perhaps you don’t want to replace it in something very delicate, but here it works like a charm.

I also decided to replace the original recipe’s vegetable oil with apple sauce and while I was at it, I added the dried apples. Despite that, I found there to be practically no apple flavor in the finished product. Probably too much sugar and butter happening (oh darn!) for the apple to really shine. But it added some nutritional value, so that’s a bonus.

We made two smaller loaves in addition to the large loaf, so that we could make sure that we weren’t poisoning our hosts! Turns out, there wasn’t much difference between the stirred up version and the non-stirred version. But I do think that layering would improve the overall incorporation and yumminess.

Asparagus Farrotto aka Spring in my Mouth »
« Lessons from the Kitchen: Bulgur Bean Burgers + Brussels Slaw